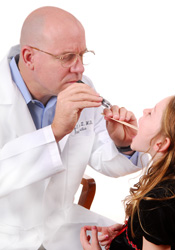 The tonsils are glands located in the back of the mouth on both sides of your throat. As part of the immune system, tonsils help fight infections. The adenoids are located behind the soft palate, the back, muscular section of the roof of your mouth. Adenoids also help fight infections. Behind the uvula, there is a passageway that connects the nose to the mouth. And in this passageway, the eustachian tubes connect the middle ear to the back of the nose. These tubes prevent large differences in pressure inside the ear. When your adenoids swell, they become inflamed and can cause blockage of the eustachian tubes. Blockage can cause your middle ear to become filled with pus, causing additional infection and swelling. This can even lead to hearing loss.

Tonsillectomy is generally performed because of repeat occurrences of tonsillitis. Tonsillitis is an infection in the throat that starts with your tonsils. These types of sore throats are usually severe and fever can occur. It hurts to swallow!

It’s important to be examined when you have tonsillitis because it’s can be dangerous if there have been five or more occurrences within one year. And when the illness is not responsive to antibiotic treatment, please see us immediately!

Additionally, if your tonsils get large enough to touch each other you probably have a serious case of tonsillectomy. Also, if there is an abscess surrounding your tonsils, you will see puss filled sacs. This is another cause for attention.

Treatment of tonsillitis and ear infections generally requires antibiotics. If left untreated, tonsillitis could damage organs in your body. Tonsillectomy is a procedure in which the tonsils are removed. Adenoidectomy is a procedure in which the adenoids are removed. The combined operation is called a T&A. Generally these surgical procedures are performed if antibiotics are unresponsive. If antibiotics do not work to eliminate tonsillitis or ear infection, a tonsillectomy and possible adenoidectomy may be performed. These surgical procedures will help you reduce the number of throat and ear infections.

Tonsillectomy and Adenoidectomy is performed under general anesthesia. Drs. O’Halloran, Egan, and Blank can remove the tonsils and/or adenoids in many different ways. Traditional surgery requires the use of a scalpel. Some surgeries respond better to a laser. When surgery is complete, bleeding is stopped and the patient is admitted into recovery. Upon awakening, you will be given pain medication. Within a little while, you will be able to go home. Surgery is usually well tolerated although a sore throat is common for the first 5-10 days after surgery. Watch for bleeding. You will initially find it easiest to swallow liquids and cold desert like foods.

Dr O’Halloran makes me feel I am his only patient. He has gotten me through 2 bouts of GERD, the last being particularly nasty, requiring extended treatment, including surgery to remove polyps from my throat. I remember coming out of anesthesia seeing him smile at me as he walked past, giving me a thumbs up! He’s the best!

Dr. Egan cured my daughter from years of chronic sinus infections! My daughter was advised by another practice that she would need sinus surgery. We went to Dr. Timothy Egan to get a second opinion. He took a great deal of time to look over her scans, listen to her history and review our options. He outlined a very doable treatment plan and helped us to avoid surgery. She continues to do well. We have sent many friends to Dr. Egan for surgery who are equally happy with their successful outcomes.

Took my 1yr old daughter to have tubes in her ear.  She was scared and apprehensive about the whole thing (obviously), but the nurses and Dr Egan were very patient, understanding, and really calmed her.  Dr. Egan explained the procedure and it was as easy as he promised. Overall the staff is helpful, the office clean, and took my insurance.  An excellent experience. So much so that I recommended it to my father in law for his hearing aid test and fitment.

I found Dr Egan when looking for a new ENT after my guy of 20 plus year retired.As a patient with long standing ENT problems I was hoping to find a doctor who would evaluate my conditions and help me to help improve my quality of allergy and sinus life throughout the seasons. Dr Egan is a great listener, diagnostician and communicator. He approaches things from a holistic standpoint as it relates to allergy care and really stresses good daily habits. His staff is very helpful. Appointments are easy.