A deviated septum is one of the most common reasons to have non-cosmetic nasal surgery. Your septum can be crooked and may result in a smaller nasal passage on one side or the other, or even both. In a normal nose, the mucosal lining swells and retract many times a day. With a deviated septum, one may have difficulty breathing from either side of the nose. It is usually from the already small passageway being blocked further from the swollen mucosal lining. Sometimes, blockage can occur when there is additional cartilage, bone or mucosal tissue.

This difficulty in breathing through the nose could be corrected through a Septoplasty. Many people breathe loudly and others think their noses are stuffed, but in fact they suffer from a deviated septum and when their tissues naturally swell, the side with the deviation is even more restricted

A Septoplasty is the surgical procedure to straighten a deviated or crooked septum to improve breathing, function, and minimize possible sinus infections, creating greater comfort for the patient. A septoplasty is almost always performed with no visible incision and normally takes about 1 to 1 1/2 hours. If the Septoplasty is being performed in conjunction with a Rhinoplasty, there may be additional, visible incisions and may take about an additional hour or more for difficult cases.

A Deviated Septum is by far the most common reason for non-cosmetic nasal surgery. Your Septum can be crooked and result in a smaller nasal passage on one side or the other, or even both sides! The mucosal lining of the nasal passages normally swell and retract several times during the day. If someone with severe or a minor deviated septum experiences difficulty breathing, it is usually from the already small passageway being blocked further from the swollen mucosal lining. Its amazing that many people who go through their entire lives may never know that their difficulty breathing through the nose could be corrected through a Septoplasty!

Turbinate reduction is commonly performed in conjunction with Septoplasty to improve the nasal airway and reduce congestion. We use the Medtronic Inferior Turbinate Blade to provide minimally invasive reduction of turbinate hypertrophy. Scientific evidence shows this technique to have superior long term results and minimal complications versus other approaches. Dr. O’Halloran devised the technique described and invented the patented Medtronic Turbinate Blade seen below. 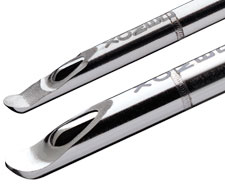 If you have concerns regarding nasal breathing or repetitive sinus infections, please contact Drs. O’Halloran, Egan, Blank and Scheidemandel. As an ENT, he can properly examine and diagnose you for the possible need of a Septoplasty or other surgery, perhaps in the form of sinus correction.

Dr O’Halloran makes me feel I am his only patient. He has gotten me through 2 bouts of GERD, the last being particularly nasty, requiring extended treatment, including surgery to remove polyps from my throat. I remember coming out of anesthesia seeing him smile at me as he walked past, giving me a thumbs up! He’s the best!

Dr. Egan cured my daughter from years of chronic sinus infections! My daughter was advised by another practice that she would need sinus surgery. We went to Dr. Timothy Egan to get a second opinion. He took a great deal of time to look over her scans, listen to her history and review our options. He outlined a very doable treatment plan and helped us to avoid surgery. She continues to do well. We have sent many friends to Dr. Egan for surgery who are equally happy with their successful outcomes.

Took my 1yr old daughter to have tubes in her ear.  She was scared and apprehensive about the whole thing (obviously), but the nurses and Dr Egan were very patient, understanding, and really calmed her.  Dr. Egan explained the procedure and it was as easy as he promised. Overall the staff is helpful, the office clean, and took my insurance.  An excellent experience. So much so that I recommended it to my father in law for his hearing aid test and fitment.

I found Dr Egan when looking for a new ENT after my guy of 20 plus year retired.As a patient with long standing ENT problems I was hoping to find a doctor who would evaluate my conditions and help me to help improve my quality of allergy and sinus life throughout the seasons. Dr Egan is a great listener, diagnostician and communicator. He approaches things from a holistic standpoint as it relates to allergy care and really stresses good daily habits. His staff is very helpful. Appointments are easy.